Since the passage of the Tax Relief and Health Care Act in 2006, the IRS Whistleblower Program has become extremely successful

What is the IRS Whistleblower Program?

Since 1867, the Secretary of the Treasury has been allowed to pay such amounts as they deem necessary “for detecting and bringing to trial and punishment persons guilty of violating the internal revenue laws or conniving at the same” under the Internal Revenue Act.

For the first 140 years, few alterations were made to this system. However, this changed with the passage of the Tax Relief and Health Care Act in 2006. The Act made fundamental changes to the Internal Revenue Service (IRS) whistleblower program.

The key change was creating a mandatory rewards law for whistleblowers in large tax cases, where previously it had been discretionary. Now, the IRS was required to give eligible whistleblowers 15 to 30% of the amount recovered. The Act also codified tax whistleblower appeal rights and required the IRS to create a whistleblower office to implement the law.

As a result of these changes, the IRS whistleblower program has become a considerable success. From 2007 to 2020, the IRS Whistleblower Office collected over $5.9 billion and made awards in the amount of over $1 billion. The program continues to grow in international importance as well with 97 whistleblowers from outside the U.S. in FY 2020 alone.

To learn more about the specifics of the law, check out our FAQ page here.

What is the IRS Whistleblower Office?

The IRS has an official whistleblower office that is authorized to make the final award decisions on behalf of the IRS and Department of Treasury. The IRS Office of the Whistleblower was created in 2006 to provide a better framework for increasing whistleblower submissions. The current director is Lee D. Martin.

The Whistleblower Office states that it:

“[is] responsible for assessing and analyzing incoming tips. After determining their degree of credibility, the case will be assigned to the appropriate IRS office for further investigation.”

Additionally, “the IRS Whistleblower Office [plays a]…vital role in evaluating its award program by providing a mandatory annual assessment of its program.”

The IRS whistleblower reward law is divided into two sections. The first section is 26 U.S.C. § 7623(a), and it gives the IRS the discretion to pay whistleblower awards. This section is based on an older provision in the law originally enacted in the 1800s. All awards paid under this provision are strictly within the discretion of the IRS, and there is no way to appeal a denial.

In 2006, the creation of the Tax Relief and Health Care Act resulted in significant changes in the IRS award program for whistleblowers. The Act created a mandatory reward law. If a whistleblower qualifies for a reward under this provision, the IRS is required to pay a reward of not less than 15% and not more than 30% of any collected proceeds obtained by the IRS based on original information provided by the whistleblower.

However, this does not cover all award claims. It only covers claims filed in cases in which the “proceeds in dispute exceed $2,000,000.” Additionally, if the claim is filed against an individual, that individual’s gross income must also exceed $200,000. Claims that do not meet the above requirements are covered under IRC § 7623(a) in which the awards are determined by discretion of the IRS.

Crucially, one does not need to be a U.S. citizen to obtain a reward under the IRS whistleblower program. The program has significant international applications and has been used to combat issues like illegal offshore banking. The largest award under the program has been for $104 million, and it was awarded to Bradley Birkenfeld, an international banker who blew the whistle on illegal offshore accounts held in Switzerland by U.S. citizens.

In 2016, a U.S. Tax Court decision granted rewards to whistleblowers on a broader definition of collected proceeds to include criminal fines and penalties. Therefore, while the implementation of the IRS whistleblower law has expanded as the agency understands the crucial nature of cooperation with whistleblowers, courts have also expanded the rights of whistleblowers as to their rewards. Read the court decision here.

And in July 2019, the program was strengthened further with the passage of the Taxpayer First Act, which created vital anti-retaliation protections for tax fraud whistleblowers and enhanced the existing program by improving communication with tax whistleblowers about the status of their submission. 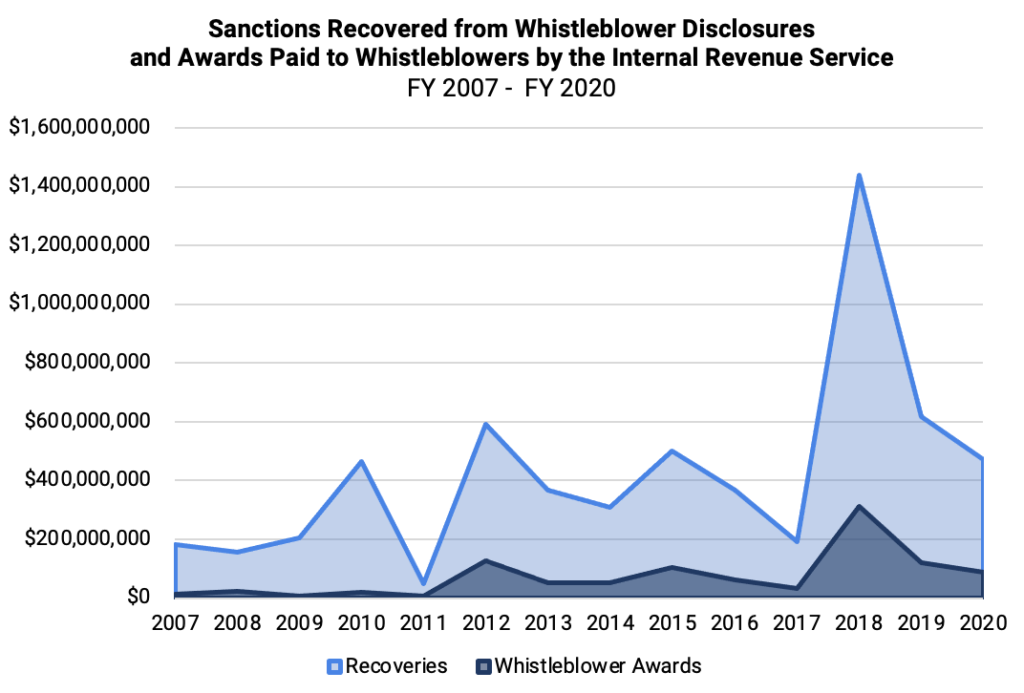 This data demonstrates that whistleblower tips and reward programs are an incredibly powerful incentive for whistleblowers to speak up, and that an enormous amount of funds are brought in to U.S. government coffers as a direct result of whistleblowers’ bravery.

A 2006 report by the Treasury Inspector General for Tax Administration (TIGTA) on the IRS’ Informant Rewards Program, completed even before the program updates, further supports this conclusion. The report found that the IRS whistleblower rewards program not only generates substantial funds for the IRS, but it also has an incredibly good cost-benefit ratio. Additionally, it found that IRS investigations that start from whistleblower tips are consistently more successful in finding tax cheats and criminal tax violators than any other detection method.

The IRS’ Whistleblower Program Annual Reports to Congress continue to demonstrate the success of its whistleblower provisions. You can find them here.

To learn more about the IRS Whistleblower Program, read Rules 4 and 7 in The New Whistleblower’s Handbook, the first-ever guide to whistleblowing. Authored by the nation’s leading whistleblower attorney, the Handbook is a step-by-step guide to the essential tools for successfully blowing the whistle, qualifying for financial rewards, and protecting yourself.