by Carly Fabian, Research Associate
Carbon Tracker warns that Exxon has flown too close to the sun

A new report from Carbon Tracker, evaluating Exxon Mobil’s growth strategy, argues that Exxon’s aggressive approach has done “astonishing damage” to investor returns. Despite promises of big growth, the company’s proven reserves have remained the same and production has fallen. Between 2014 and the end of 2019, Exxon’s return to shareholders was negative 10%. This year, Exxon dropped out of the S&P 500 “Top ten” stocks and was removed from the Dow Jones index, a “mighty fall” for a company that has defined itself as the industry’s leader.

According to Carbon Tracker, Exxon’s problems stem from overinvesting in capital intensive, high-cost, high-carbon projects. The think tank warned in 2014 that this aggressive growth strategy could lead to stranded assets. Yet since then, Exxon has continually stood out for its investments in high-carbon projects. It has also been an outlier for its aggressive stance against de-booking reserves (backed by a supposedly superior booking process) and confident assurances that none of its assets would become stranded due to climate risks.

Carbon Tracker’s analysis finds that this hubris now makes Exxon one of the oil companies least prepared for the energy transition. Compared with European oil majors, Exxon hasn’t promised any climate-related emissions targets or disclosed price assumptions. The company also waited far longer than even its American peers to disclose potential write downs after the oil price crashed this year.

NWC’s report Exposing the Ticking Time Bomb argues that the conditions facing oil and gas companies like Exxon fit the criteria for the fraud triangle: unprecedented pressure-related motivation for fraud from the energy transition, combined with unique opportunities to hide climate risk and a long history of rationalizations for deception.

In addition to these three factors, other researchers posit a fourth factor necessary to translate these conditions into fraud: executive arrogance. According to fraud researchers Michel Magnan, Denis Cormier and Pascale Lapointe-Antunes, “managerial hubris” is what accelerates the “sequence of incentives, opportunities and attitudes (rationalization) that bring CEOs to engage in financial reporting frauds or to be oblivious to such frauds being committed in their own entourage.”

This is the kind of hubris now targeted in multiple lawsuits against Exxon for its brazen deception of consumers, the alleged failure to account for carbon costs, and the alleged failure to write down a large part of its USD$41 billion purchase of XTO Energy Inc. Whether any these aggressive stances constitute fraud will be determined by the outcome of these cases, but Carbon Tracker’s analysis shows that, regardless of those outcomes, investors are already suffering. 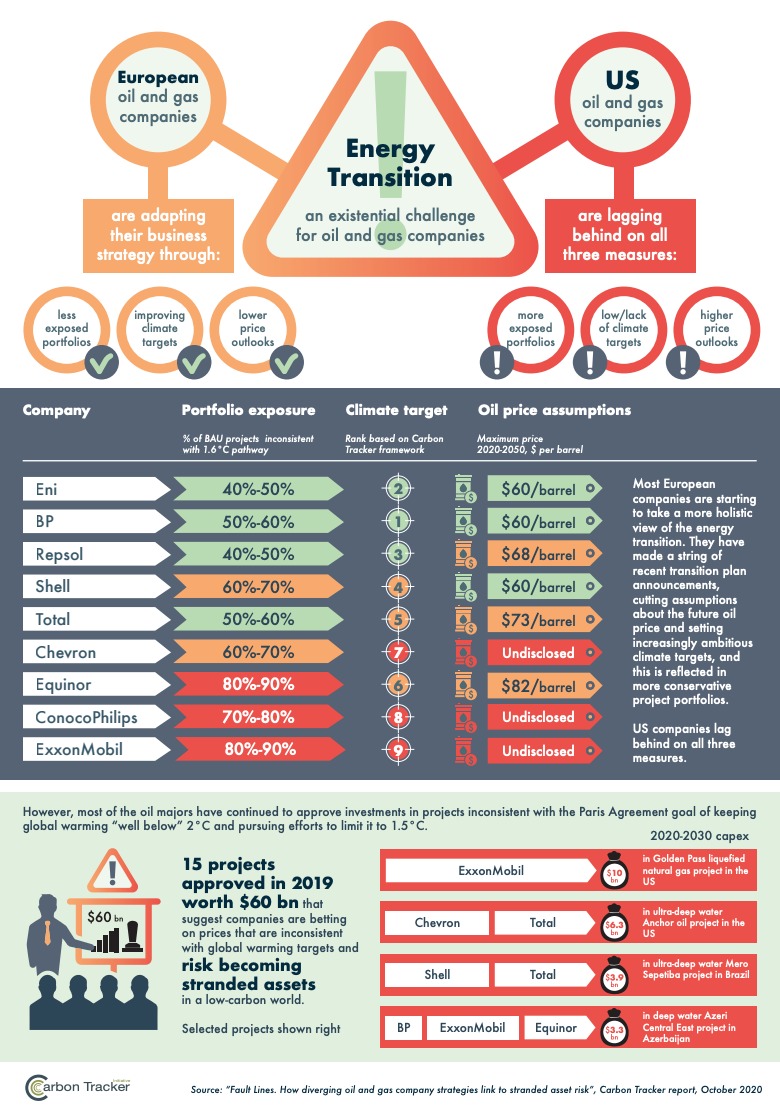