As electric vehicles have cut into demand for gasoline in recent years, the oil and gas industry has invested heavily in petrochemicals, based on the assumption that plastic demand would double.  Plastic was supposed to provide a life boat for a struggling industry, but a recent report by financial think tank Carbon Tracker and development group Systemiq suggests that this lifeboat might be filled with holes.

The plastic industry is now facing new risks from single-use plastic bans and plastic waste import bans in the same regions that were supposed to drive demand growth. Combined with market over-saturation and disruption from new technology and alternatives, these factors could cause plastic demand to peak much sooner than expected. If the industry continues on this path, Carbon Tracker predicts that USD$400 billion in petrochemical assets could become stranded assets. 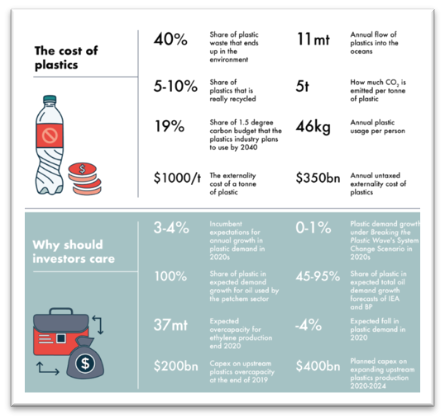 Carbon Tracker. “The Future’s Not in Plastics: Why Plastic Demand Will Not Rescue the Oil Sector” (September 2020)

The potential for such a significant amount of stranded assets creates an attendant risk of accounting fraud. The motivation for fraud is highest when decision-makers feel pressure to meet unrealistic expectations or to cover for worsening performance. As the gap between the industry’s expectations for plastic demand and the reality grows, this gap could open the door to fraud. With executives already facing tremendous pressure to prove that oil and gas companies still have a viable investment thesis, some executives could be tempted to delay disclosing negative developments or writing down expensive petrochemical assets.

The risk that oil majors could fail to write down major assets isn’t just a hypothetical concern. In 2004, a Securities and Exchange Commission (SEC) investigation revealed that Shell had been failing to de-book risky reserves, allowing the company to fraudulently inflate its reserves by one-fifth. More recently, in 2017 investors sued Exxon for failing to disclose write-downs. According to the complaint, as the price of oil and gas declined in 2014, Exxon failed to properly impair its oil and gas reserves by failing to consider the costs associated with climate change.

Hiding major write-downs indefinitely is difficult, but fraudulently delaying even them for a brief time can have major impacts. According to the complaint against Exxon, by delaying write-downs, Exxon was able to influence rating agencies to issue strong ratings on Exxon’s USD$20 billion of outstanding debt ahead of a USD$12 billion public debt offering in March 2016.

If companies fail to disclose write-downs to the SEC, whistleblowers could play an important role. To encourage those with inside information about accounting fraud to step forward, the Dodd-Frank SEC Whistleblower program allows whistleblowers, including non-U.S. citizens, to confidentially report any company publicly-traded in the U.S. who are fraudulently delaying the disclosure of impairments. Whistleblowers who provide original information that leads to successful SEC prosecution can receive between 10% and 30% of monetary sanctions. As the pressure builds on oil, gas and petrochemical companies, whistleblowers could provide an important line of defense against accounting fraud, while protecting their identity and qualifying for a reward.

This is the second installment in a five-part series on the NWC blog on whistleblowing in the plastics industry. Read part 1 here.