Yet whistleblower protections under the Dodd-Frank Act, as well as the successful SEC and CFTC whistleblower programs, have been consistently under attack. One case, Digital Realty Trust v. Somers (No. 16-1276), has proven to be devastating to whistleblowers. Allies of big business attempted to convince the courts that employees who report violations of securities law to their supervisors or corporate compliance programs (as in, internally), but not to the SEC, are not protected from retaliation under the Dodd-Frank Act’s protection as SEC whistleblowers. The same issue applies to whistleblowers who do not first report to the Commodity Futures Trading Commission (CFTC).

The National Whistleblower Center submitted an amicus curiae , also known as friend-of-the-court, brief to the U.S. Supreme Court, urging the Justices to reject the convoluted logic of big business allies and protect internal whistleblowers. The amicus brief was widely read and influential. In fact, an analysis of the Supreme Court arguments by the well-respected SCOTUS Blog, which highlights Justice Stephen Breyer’s point about the National Whistleblower Center’s amicus brief, can be found here. Senator Charles Grassley, the then-Chairman of the Senate Judiciary Committee and the top-ranking official on the Senate Whistleblower Caucus, also filed a brief in support of the whistleblower. Sen. Grassley argued that “it would make no sense to read” the Dodd-Frank Act as only protecting employees’ internal disclosures if they “also reported to the SEC” stating the “obvious effect of petitioner’s interpretation will be to discourage internal reporting.”

Moreover, the National Whistleblower Center also provided a report to the public, published during the formation of the SEC Whistleblower Program, which proves that “the overwhelming majority of employees voluntarily utilized internal reporting processes”, and therefore are effected by the result of the Digital Realty case. The report, titled “Impact of Qui Tam Laws on Internal Whistleblowers”, can be read here.

Unfortunately, on February 21, 2018, the U.S. Supreme Court ruled in support of Digital Realty, and against whistleblowers. Seemingly unaware of the practical consequences of its decision, the Supreme Court unanimously ruled to leave whistleblowers who report internally without critical protections under the Dodd-Frank Act.

Stephen M. Kohn, then-Executive Director and now Chairman of the Board of the National Whistleblower Center (NWC) and an attorney who has represented “internal” whistleblowers since 1984, described the Supreme Court decision in Digital Realty Trust v. Somers (No. 16-1276) as “devastating.”

“The overwhelming majority of whistleblower report violations directly to their managers and internal corporate compliance programs. Stripping internal whistleblowers of protection under the Dodd-Frank Act could negatively impact over 90% of corporate fraud retaliation cases,” Kohn said.

Kohn, in a piece for Law30, also explained that employees now take grave risks in using internal compliance programs. Titled “Digital Realty’s Victory is a Loss for Corporate Compliance,” the piece describes the stunning blow of the U.S. Supreme Court decision for whistleblowers. This long-form writing describes the background of the SEC whistleblower program, and how and why the rules were created. It notes the long process, as well as the lobbying work of big business toward the SEC in arguing for internal compliance programs. It also tells the story of Paul Somers, who was retaliated against after using the internal reporting procedures of his employer, Digital Realty. As Kohn describes,

And Kohn uses his expertise to offer a word of warning to future whistleblowers: In light of the Supreme Court’s decision, whistleblowers should hire an attorney and take their complaints directly to the Securities and Exchange Commission (SEC).

The U.S. Supreme Court’s decision in Digital Realty put countless internal whistleblowers in grave danger. Yet there is a clear solution.

In May 2019, an act to amend the definition of whistleblower in the Securities and Exchange Act, H.R. 2515, was introduced in the House of Representatives. Titled “The Whistleblower Protection Reform Act,” the law would ensure that internal whistleblowers are protected just as Congress originally intended, undoing the devastating effects of Digital Realty. The NWC strongly supports this legislation; attorneys with the NWC reviewed the legislation before its introduction and believe it is the best way to proactively protect whistleblowers through Congressional action moving forward. The law passed the House on July 9th, 2019.

In September 2019, Senator Charles Grassley introduced S.2529 in the Senate. Titled the “Whistleblower Program Improvements Act”, it follows the House bill in ensuring that internal whistleblowers are protected under the Dodd Frank Act. It also expedite the processing time for Dodd-Frank rewards following successful prosecutions. Currently, the process has been plagued with long delays. We urge Congress to enact this law immediately.

Understanding the Value of the Dodd-Frank Whistleblower Programs

The Dodd-Frank Wall Street Reform and Consumer Protection Act (often simply known as Dodd-Frank) enhanced the Securities Exchange Act, codified in law as 15 U.S.C. § 78(u)(6), in the wake of the 2008 financial crisis and created the SEC Whistleblower Program and CFTC Whistleblower Program. They offers rewards to qualified persons who provide information which leads to the recovery of monetary sanctions. The law is structured to ensure that whistleblowers’ information benefits the SEC and CFTC to the greatest extent possible.

Section 922 of the law provides that whistleblowers can file anonymous and confidential claims. Crucially, eligibility does not depend on U.S. citizenship. Whistleblowers who provide original information that leads to a successful enforcement action entitled to a mandatory reward of between 10% to 30% of the collected proceeds. This incentivizes whistleblowers to provide high-quality information on significant crimes. Specific whistleblower provisions under this law are explained by leading whistleblower attorneys here.

The data continues to prove the efficacy of the SEC whistleblower program.

The data also continues to prove the efficacy of the CFTC whistleblower program. 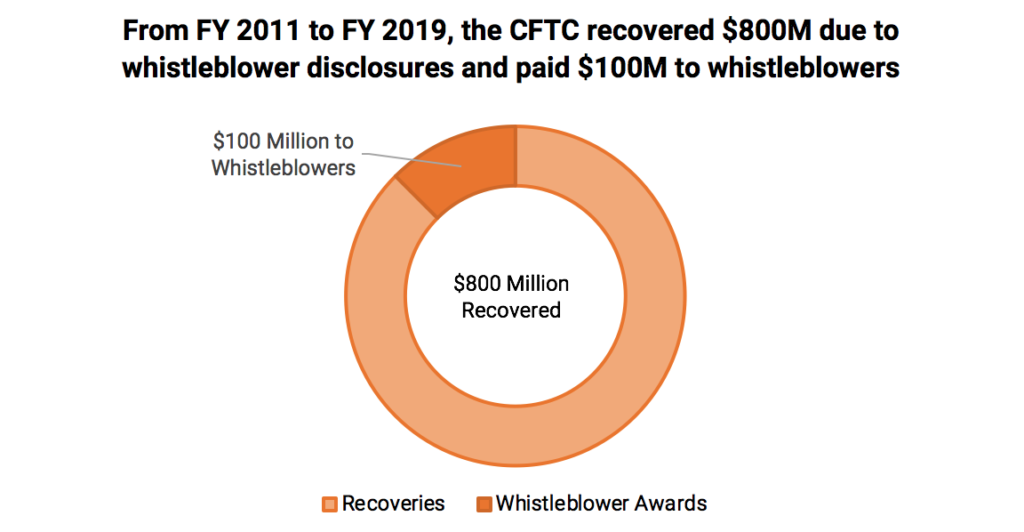 From the inception of the Whistleblower Program in 2011 through FY 2019, the CFTC has issued 14 awards amounting to approximately $100 million. The Commission actions associated with those awards have resulted in sanctions orders totaling more than $800 million.