In 2011, a report by Carbon Tracker introduced the concept of the “carbon bubble,” highlighting that a shift to a low-carbon economy would leave a significant portion of hydrocarbon assets stranded.

Amid a growing global consensus on the need to keep a global temperature increase below two degrees Celsius (°C) above pre-industrial levels, the financial think tank Carbon Tracker released a report in 2011, entitled “Unburnable Carbon – are the World’s Financial Markets Carrying a Carbon Bubble.” The report found that hydrocarbon reserves owned by the top listed fossil fuel companies have the potential to “take the world way beyond 3˚C.” In doing so, the report also introduced new terms, including “unburnable carbon,” “stranded assets,” and the “carbon bubble,” into both financial and environmental lexicons.

Using the “carbon budget” created by the Potsdam Climate Institute, the authors calculated how existing proved reserves owned by oil, gas, and coal companies fit within the budget. The Potsdam Climate Institute had found that, to have an 80% chance of staying below the two-degree limit, the total global volume of carbon dioxide (CO2) emissions would be 886 gigatonnes of equivalent carbon dioxide (GtCO2). By 2011, emissions had reduced the budget to 565 GtCO2.

Applying the numbers from the carbon budget and analyzing the top 100 coal and top 100 oil and gas companies, the report found that the proved reserves of these companies alone, representing 745 GtCO2, would exceed the budget by 180 GtCO2. To maintain an 80% chance of staying under the two-degree limit, the carbon budget could only accommodate emissions from 20% of the proved reserves listed by fossil fuel companies, meaning that only 149 of the 745 GtCO2 could be burned. 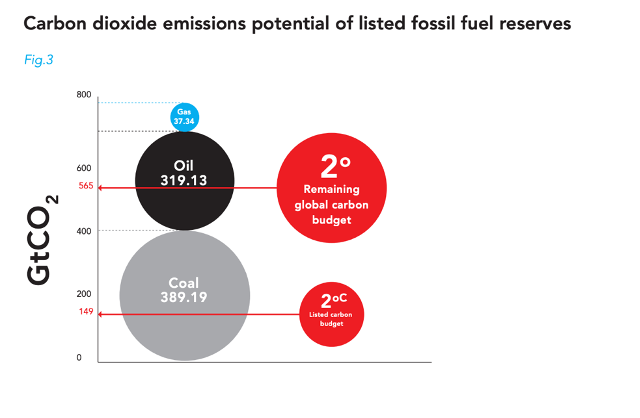 The valuation of fossil fuel companies is primarily based on the value of their most valuable assets, their oil, gas, and coal reserves. This requires substantial capital to invest in long-term projects in which there may be a several-year gap between the discovery and exploitation of the reserve. A company’s future growth is also determined by a company’s reserves replacement ratio, the amount of new reserves added each year relative to existing reserves.

Valuation has historically depended on the assumption that companies can extract and sell all of their listed oil and gas reserves and continually acquire new reserves. In order to maintain strong reserve replacement ratios, companies raise capital on the stock market to fund continual exploration and production, on the assumption that future reserves can be burned as well.

The presence of unburnable carbon and threat of stranded assets, however, suggests that this assumption is unrealistic. The transition to a low-carbon economy would require that at least 80% of carbon remain in the ground, requiring major asset-write downs. The report argued that share prices were over-valued based on the unrealistic assumption of unlimited growth, creating a “carbon bubble.”

Since the report was released, companies have spent hundreds of billions of dollars finding and developing new reserves, including more than $50 billion since 2018 alone. This expansion is unlikely to slow. Many large fossil fuel companies still tie executive compensation to the discovery of new reserves, ensuring that executive incentives are tied to the bubble’s continued growth. The likelihood of write-downs has also increased; a recent study in Nature found that, even without climate legislation, competition from renewable energy and changing demand alone could strand oil and gas assets. 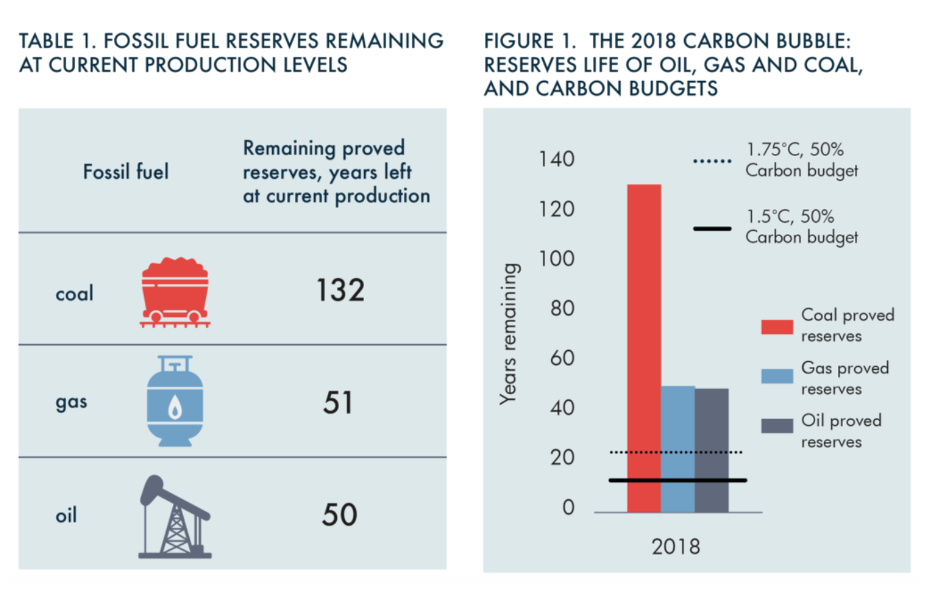 Carbon Tracker’s 2019 report “Breaking the Habit” found that, in 2018, all major oil companies had sanctioned projects that fall outside the carbon budget, including Shell’s approval of an LNG Canada project and BP, Total, ExxonMobil, and Equinor’s Zinia 2 project in Angola. While oil sands projects are particularly carbon intensive, ExxonMobil also approved a new $2.6 billion Canadian oil sands project. Using the International Energy Agency’s Beyond 2 Degrees Scenario, a subsequent report, “Balancing the Budget,” found that major oil and gas companies need to reduce production by 35% to remain below this budget target. The report warned that companies that continued investing in high-cost projects risked “destroying significant shareholder value.” 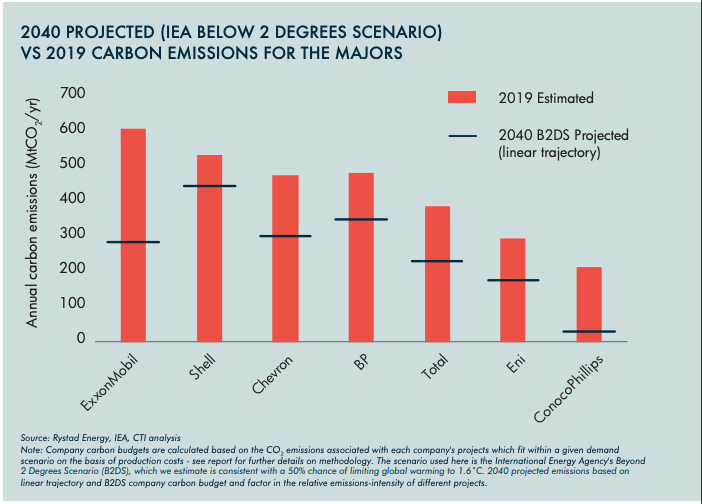 In June 2020, Carbon Tracker published a report, “Decline and Fall,” predicting serious financial consequences from the carbon bubble. According to the World Bank, future profits from the fossil fuel industry are valued at $39 trillion. However, the report determined that “if demand falls by 2% a year in line with the Paris Agreement and discount rates rise in line with increased risk, future profits would collapse…to just $14 trillion.” The combination of falling demand and rising investment risk, accelerated by coronavirus, was “likely to slash the value of oil, gas, and coal reserves by nearly two thirds.”

The Carbon Bubble and Financial Reporting

To address the risk of the “carbon bubble” investor groups have advocated for more guidance from the U.S. Securities and Exchange Commission (SEC) on reporting climate-related risks. Even without more stringent climate disclosure guidelines, however, companies who fail to accurately address the impact of the “cost of carbon” on reserves could be violating existing reporting regulations.

When analysts and investors evaluate E&P companies, they rely heavily on the company’s proved reserves, as well as the company’s reserve replacement ratio. To ensure that investors have accurate information from publicly-traded companies that list shares on the New York Stock Exchange, the SEC sets standards for proved reserves and requires all publicly-traded companies engaged in significant oil and gas activities to disclose estimates of both their proved and overall oil and gas reserves to supplement their public financial statements.

When conditions change and the reserves cannot be feasibly recovered, companies are required to “debook” them and disclose the revision to investors. The SEC requires U.S. companies to comply with U.S. generally accepted accounting principles (U.S. GAAP) when preparing and filing annual and interim financial reports. The SEC requires foreign private issuers to comply with either U.S. GAAP or other accepted accounting standards, such as the International Financial Reporting Standards.