High Risk of Fraud in the Oil and Gas Industry

To predict the conditions that lead to a high risk of fraud, anti-fraud professionals and researchers frequently rely on a concept called the “fraud triangle,” a model for understanding three conditions that lead to fraud: opportunity, motivation (which can take the form of incentives or pressure), and the ability to rationalize fraud. To identify industries that face a particularly high risk overall, researchers look for the widespread presence of these three factors.

During a crisis, financial crimes often proliferate as individuals take advantage of weakened institutions and overall chaos. Fraud is a particular concern where finance, production, sales and operations managers face pressure to deliver positive results, and companies do not put in place adequate internal controls. This is especially true in the oil and gas industry, where 35% of respondents in a recent EY survey stated that they would be willing to act unethically to help their business in an economic downturn, and which is currently grappling with major financial challenges.

How oil and gas companies address the policy and physical risks of climate change is of great interest to both investors and the broader public. Yet, without the involvement of whistleblowers, key elements of companies’ climate strategies may not be fully disclosed.

A 2018 Government Accountability Office report found that “[i]mpacts from a changing climate can pose serious risks to the global economy and affect many economic sectors” and that “SEC reviewers may not have access to the detailed information that companies use to arrive at their determination of whether risks, including climate-related risks, must be disclosed in their SEC filings.” The SEC issued interpretative guidance in 2010 to public companies about addressing the effects of climate change. However, as the Congressional Research Service has noted, many stakeholders, regulators, and companies believe that the SEC and other regulators must take significant additional action to ensure that climate-related risks are fully addressed in companies’ disclosures.

These concerns are particularly justified considering the billions of dollars at risk due to the so-called carbon bubble.  Research shows that bubbles frequently coincide with epidemics of securities fraud.

The fossil fuel industry’s historic approach to climate change communications is another significant reason for skepticism about climate-related disclosures to shareholders and other stakeholders. Key industry leaders knew about the great risks of climate change as early as the 1980s; rather than communicating those risks, it funded an array of organizations to disseminate information dismissing those risks and sowing confusion, all for the purpose of forestalling regulation. Historian Naomi Oreskes asserts that this disinformation campaign on climate change could be the “greatest scam in history.”

Another reason for scrutiny of the industry is its disproportionally large share of prosecutions for violations of the Foreign Corrupt Practices Act and its tracking record of defrauding the federal government and Native American communities through elaborate schemes In 1998, a group of whistleblowers confirmed longtime suspicions of royalty underpayments in the oil and gas industry when they revealed that at least twelve major companies operating in the U.S. had engaged in a “nationwide conspiracy.” A series of state and federal suits accused the companies of defrauding the government and Native American communities through elaborate schemes designed to systematically underpay leasing royalties from 1988 to 1989, and the companies involved ultimately settled the cases for a total of more than $10 billion.

With executive compensation tied to either stock prices or the discovery and development new reserves, oil and gas industry executives already have substantial incentive to engage in securities fraud, and as the industry faces greater financial challenges, the pressure to engage in fraud to meet financial targets or help a company survive a downturn will likely increase. A reliance on industry self-reporting for climate risks suggests that there are opportunities for fraud to go undetected, and EY data further suggests that, when presented with the combination of financial pressure and opportunity, a significant portion of employees in the oil and gas industry can rationalize fraud. Taken together, this unique combination of motivations, opportunities, and rationalizations suggest that, as the oil and gas industry faces unique financial pressure, it also creates conditions that are highly conducive to widespread fraud. 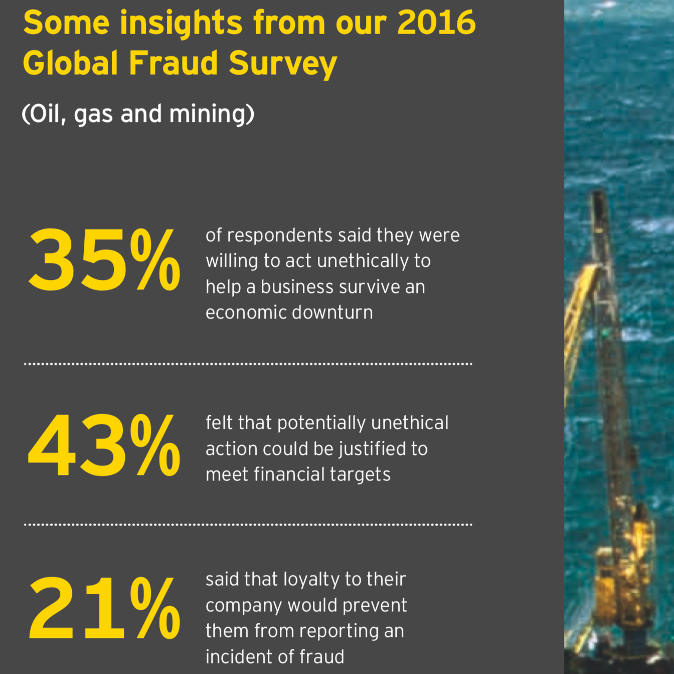