The Dodd-Frank Act, enacted in 2010, created the successful SEC and CFTC whistleblower programs.

What is the Dodd-Frank Act?

Among the most important whistleblower laws is the Dodd-Frank Act, passed in 2010 following the financial crisis of 2008-09. The Act is a major Wall Street reform law covering commodities and securities actions worldwide that aims to promote financial stability by improving accountability and transparency. It created two whistleblower programs in the U.S. Securities and Exchange Commission (SEC) and the Commodity Futures Trading Commission (CFTC), as well as enhanced whistleblower provisions under the Foreign Corrupt Practices Act.

Securities, commodities, and foreign bribery whistleblowers are now covered under enhanced provisions aimed at protecting their confidentiality and permitted to anonymously file reward complains. Whistleblowers outside of the United States are also now entitled to a financial reward.

Dodd-Frank built upon the 2002 Sarbanes-Oxley Act (SOX), a piece of corporate reform legislation passed following major scandals like Enron & WorldCom. SOX intended to protect investors from corporate accounting fraud by strengthening the accuracy and reliability of financial disclosures. However, SOX’s whistleblower provisions were weaker than other successful laws.

Dodd-Frank amended SOX to increase the complaint filing period with the Department of Labor (DOL), to clarify the right to a jury trial, to bar the use of arbitration agreements, and to expand remedies for violations of whistleblower protections. Dodd-Frank also expanded SOX to cover more employees, including those of “nationally recognized statistical rating organization[s].”

What are the whistleblower offices created by Dodd-Frank?

However, unlike the False Claims Act, in which a whistleblower can initiate a lawsuit against the wrongdoer if the United States fails to investigate or sanction the wrongdoer, the Dodd-Frank Act does not provide for a private right of action. In other words, the whistleblower cannot file his or her own lawsuit against the company, but rather must rely on the SEC or CFTC to investigate.

To learn more about the Dodd-Frank Act’s whistleblower provisions, read The New Whistleblower’s Handbook, the first-ever guide to whistleblowing, by the nation’s leading whistleblower attorney. The Handbook is a step-by-step guide to the essential tools for successfully blowing the whistle, qualifying for financial rewards, and protecting yourself.

The Dodd-Frank Act is Extremely Successful 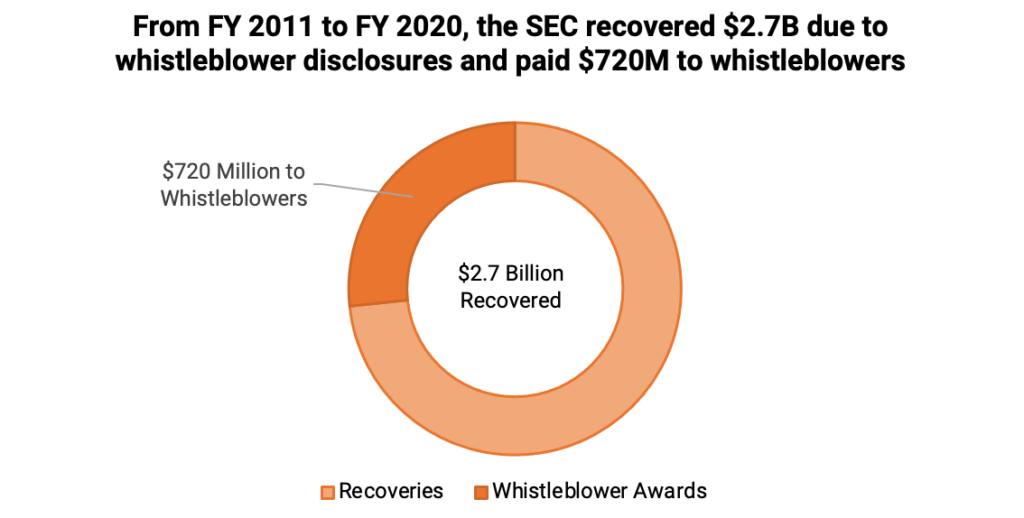 In FY 2020 alone, the SEC received a record-breaking 6,900 whistleblower tips. The tips came from all 50 states as well as 78 countries outside of the United States.

Leadership of the SEC agree that whistleblower information is crucial for the success and ability of the SEC enforcement capacities. Time and time again, the SEC has made it clear: whistleblowers should not hesitate to come forward with information that they believe may lead the SEC to discover and prosecute criminals who aim to evade and undermine U.S. laws.

Former SEC Chairman Mary Jo White commented in 2013, “The whistleblower program . . . has rapidly become a tremendously effective force-multiplier, generating high quality tips, and in some cases virtual blueprints laying out an entire enterprise, directing us to the heart of the alleged fraud.”

Not only are such corporate whistleblower programs force multipliers, but they also enjoy broad public support. A Whistleblower News Network poll released in October 2020 shows that the American public considers corporate fraud a national priority and wants to help whistleblowers who expose it.

Whistleblower tips and reward programs are an incredibly powerful incentive for whistleblowers to speak up, and an enormous amount of funds are brought into U.S. government coffers as a direct result of whistleblowers’ bravery. The SEC and CFTC’s Office of the Whistleblower Annual Reports to Congress continue to demonstrate the success of these whistleblower provisions. You can find them here and here.