Whistleblower Laws Around the World

Whistleblowers around the world can play a powerful role in challenging corruption, transnational crime, and environmental destruction. In 2003, the crucial role of whistleblowers, and the need for whistleblower protection, was recognized as a part of international law when the United Nations adopted the Convention Against Corruption. This Convention was signed by 140 nations and formally ratified, accepted, approved, or acceded by 137 nations, including the United States.

Support for whistleblower protection in international law can also be seen in the African Union Convention on Preventing and Combating Corruption and the Organization of American States Inter-American Convention against Corruption. International organizations have also been influential in pushing for greater international adoption of whistleblower laws and best practices, including the Group of Twenty (G20), the Organization for Economic Cooperation and Development, and the Asia-Pacific Economic Cooperation (APEC).

At the national level, there has been a growing global interest in establishing whistleblower laws. Whistleblower protections have been enacted in at least 59 countries. Without adequate protections and rewards, however, many laws still fall short of supporting effective whistleblowing. 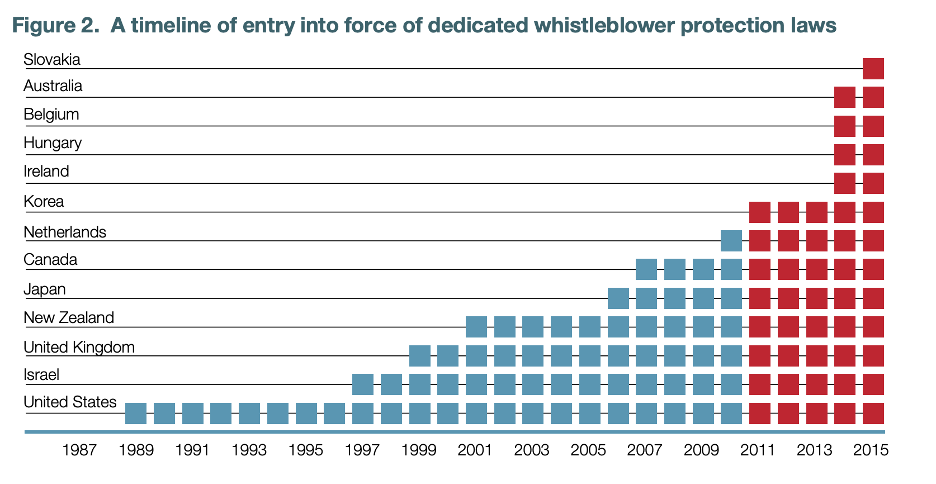 Whistleblower protections can also take a wide range of forms. These include sanctions against perpetrators of retaliation, the right to refuse to participate in wrongdoing, and, in some cases, physical protection for whistleblowers and affected family members. In 2014, the OECD found that the countries with the most comprehensive whistleblower laws were the United States, Canada, Japan, Australia, South Korea, the Netherlands, New Zealand, and the United Kingdom.

While many countries have made progress in adding new protections, studies continue to show major weaknesses in whistleblower protection. “Breaking the Silence” noted that whistleblower programs in many G20 countries suffered from “the lack of protected external disclosure channels, a lack of protection for anonymity, and a lack of dedicated oversight to receive and investigate disclosures.”

In 2018, a BluePrint for Free Speech report also evaluated whistleblower laws in the European Union. The report found that “most laws are poorly and erratically enforced” and that “without dedicated agencies to advise, support, and protect whistleblowers, the laws could not succeed in protecting whistleblowers.” A 2019 report by the International Labour Organization similarly found that, although many countries have made strides in creating or expanding whistleblower laws, major gaps and challenges remain in implementation.

In South Korea, the National Tax Service maintains two reward programs which allow individuals with significant information on tax law violations to report. Since 2012, the number of cases has increased each year and whistleblowers have been awarded $44 million dollars.

In 2014, the Canadian Revenue Association introduced a reward program for whistleblowers to report tax fraud. In the year following the introduction of the law, previously unreported offshore income and assets doubled. In 2015, Ontario became the first Canadian province to introduce a whistleblower reward law for reporting securities fraud. The law allows whistleblowers who report securities fraud to the Ontario Securities Commission to receive 5% to 15% of the total monetary sanctions. As of 2020, the program has received more than 200 tips and three recent awards totaled $7.5 million.

More countries around the world have continued to implement whistleblower laws, especially after the European Union Directive in April 2019. In an effort to support these endeavors, the National Whistleblower Center has sent letters to member countries providing guidance on whistleblower laws and protections. If you would like to read these letters, you can find them here.

To learn more about the importance of whistleblower reward laws, read The New Whistleblower’s Handbook, the first-ever guide to whistleblowing, by the nation’s leading whistleblower attorney. The Handbook is a step-by-step guide to the essential tools for successfully blowing the whistle, qualifying for financial rewards, and protecting yourself.