In recent years, there has been a monumental increase in wildlife crime, resulting in an extinction crisis that threatens the global diversity of species, as well as the security and stability of many countries. Wildlife trafficking is a leading cause of the wildlife extinction crisis our planet faces today. Unfortunately, it is a multi-billion dollar global industry with a low rate of arrests and convictions. Because of its underground nature, detection is almost impossible through law enforcement officials acting alone. Protecting and incentivizing people to report illegal activity is crucial to combating this increasingly lucrative trade and the poaching that sustains it.

The National Whistleblower Center’s Global Wildlife Whistleblower Program is comprised of legal and policy advocacy on behalf of endangered wildlife. NWC provides a confidential and completely secure online in-take form where individuals across the world can report wildlife crime and then connects whistleblowers to attorneys who can help submit their reports to U.S. authorities and apply for rewards under appropriate U.S. laws. The Global Wildlife Whistleblower Program was a Grand Prize Winner of the Wildlife Crime Tech Challenge, an initiative of USAID in partnership with the National Geographic Society, the Smithsonian Institution, and TRAFFIC.

On the policy front, the National Whistleblower Center is proud to support theWildlife Conservation and Anti-Trafficking Act. This bill, introduced in the U.S. House of Representatives, would empower whistleblowers to report information about wildlife crime and strengthen the enforcement capacity of U.S. agents. It is a critical tool to stop the current wildlife extinction crisis. The NWC press release can be found here, and the joint press release from Reps. Garamendi and Young can be found here.

About the Wildlife Conservation and Anti-Trafficking Legislation

On January 30, 2019, Congressmen John Garamendi (D-CA) and Don Young (R-AK) reintroduced the Wildlife Conservation & Anti-Trafficking Act to the 116th Congress. The bill was originally introduced on May 8, 2018 in a similarly-bipartisan effort by Reps. Young and Madeleine Bordallo (D-GU). If implemented, this groundbreaking legislation will enhance the ability of informants around the world to detect and report wildlife crimes, with no additional expense to taxpayers.

Here are three key points about the bill:

The NWC played a leading role in the campaign to inform non-profits and the public about this legislation and garner their support. NWC has successfully obtained endorsements from many high profile anti-trafficking and wildlife conservation NGOs. The following NGOs have endorsed the legislation:

A coalition of endorsing organizations has written to Reps. Raúl Grijalva (D-AZ), Chairman of the Committee on Natural Resources, and Ranking Member Rob Bishop (R-UT) to express their support for the legislation. With centuries of combined experience advocating to stop wildlife destruction, the signatories of the letter explain that this landmark anti-trafficking bill will radically increase wildlife crime enforcement and activate wildlife whistleblowers around the globe. Read the letter here.

Take Action! Support the Wildlife Conservation and Anti-Trafficking Act by writing to your Representatives in Congress, urging that they vote in favor of landmark anti-wildlife trafficking legislation. We have the momentum – the time to take action is now!

⇒ Here is where you can find contact information for your Representative.

⇒ Here are the talking points that you can use when making that call.

Frequently Asked Questions About the Wildlife Conservation and Anti-Trafficking Act

Q: What is the Wildlife Conservation and Anti-Trafficking Act?

The Wildlife Conservation and Anti-Wildlife Trafficking Act is a bill that was reintroduced to the U.S. House of Representatives by Reps. John Garamendi (D-CA) and Don Young (R-AK). It is a landmark, bipartisan piece of legislation that would enhance the ability of the federal government to detect and enforce wildlife crimes, thereby helping to reverse the global extinction crisis.

Q: What does the Wildlife Conservation and Anti-Trafficking Act do?

The Act would strengthen U.S. capacity, laws, and inter-agency coordination to better combat wildlife trafficking. The bill is powerful for three main reasons:

Q: How are whistleblowers protected under the Wildlife Conservation and Anti-Trafficking Act?

The bill mandates confidentiality and anonymity for whistleblowers throughout the world, enabling them to safely report trafficking crimes. It incentivizes reporting by requiring rewards be paid to qualified whistleblowers whose original information results in a successful prosecution. Finally, it requires the responsible federal agencies to establish Whistleblower Offices to ensure whistleblower concerns are properly investigated and rewarded.

Q: How does the bill enhance enforcement?

The bill makes trafficking a predicate offense under the Racketeer Influenced and Corrupt Organizations Act (RICO) and Travel Acts. RICO is the most powerful anti-corruption law in the United States, and has been used successfully throughout the country to target and crush organized crime. Penalties recovered from successful prosecution under these laws would be mandated to go directly into conservation efforts. The bill is structured so that the prosecution of wildlife crime would result in fund generation for the protection of wildlife, at no additional expense to the U.S. taxpayer.

Q: How does the bill help wildlife conservation?

The law mandates that all the fines and penalties recovered from the traffickers be used solely for enhancing wildlife conservation worldwide. The law has the potential to generate millions of dollars, which would then be invested into the protection and restoration of critically endangered species. Similar whistleblower-based laws, such as the False Claims Act and the Foreign Corrupt Practices Act, have brought in millions of dollars annually into government coffers.

Note that with the reintroduction is substantially the same bill, with even increased bipartisan support. The text of the 2018 bill can be found here. Some of the key changes of the reintroduced bill include:

It’s time to contact your Representative in Congress, and urge them to support the Wildlife Conservation and Anti-Trafficking Act!

Take action by writing your Representative, or call them directly by finding their contact information and then using our talking points when speaking with them or a staff member. Calling or writing to a member of Congress is the most effective way to ensure that your voice is heard, and that your priorities are represented! 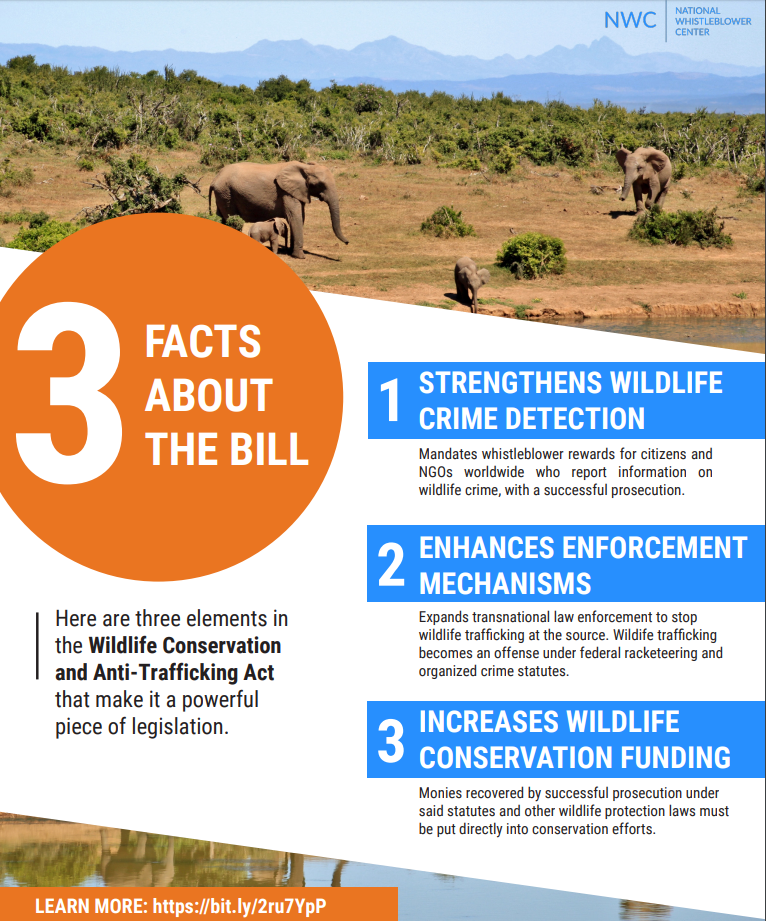 READ OUR SPECIAL REPORT TO CONGRESS ABOUT THE BILL:

The National Whistleblower Center has released a report explaining the importance of this bill and demonstrating its potential effects to fight insidious wildlife crime. The report was released to members of Congress, urging them to support the bill.

The U.S. Government Accountability Office (“GAO”) vindicated the position of the National Whistleblower Center! After a year-long investigative process into the current implementation of wildlife whistleblower laws, the GAO issued a report which demonstrates that U.S. government agencies must take action to better enforce and combat the illegal wildlife trade. “This report reinforces the urgent need for Congressional action,” said Stephen M. Kohn, Chairman of the Board of NWC. The report proves that the current wildlife trafficking and extinction crisis is untenable, and that something must be done urgently. The full text of the GAO report can be viewed here.

The National Whistleblower Center understands the importance of in-depth research and analysis. NWC used the Freedom of Information Act (“FOIA”) requests as well as an independent investigation by the Government Accountability Office (GAO) to conduct an in-depth analysis of Fish and Wildlife Service’s whistleblower program and its payment of rewards from 2003-2016. Read our report here.

Although the Fish and Wildlife Service has begun taking steps to implement reforms and build a successful program as Congress intended, there is still more work to do. Read about the documents made public by the National Whistleblower Center’s work, and what we are doing today here.

LEARN MORE ABOUT WHY THE BILL WILL WORK:

Take Action! Support the Wildlife Conservation and Anti-Trafficking Act by writing to your Representatives in Congress, urging that they vote in favor of this landmark anti-wildlife trafficking legislation. We have the momentum – the time to take action is now!

Looking to do even more? You can also contact your Representative directly:

⇒  Here is where you can find contact information for your Representative  ⇐