Combatting Corruption in the Timber Trade

Whistleblowers around the world can use the Foreign Corrupt Practices Act to report corruption in the timber trade, while protecting their identity and qualifying for a reward.

Corruption, defined as the abuse of entrusted power for private gain, undermines legal and sustainable forestry and enables the illegal trade in timber around the world. In addition to undermining sustainable management, corrupt timber practices reduce public revenue, finance conflict, and lead to environmental degradation, all of which particularly harm forest-dependent communities.

Where illegal deforestation is prevalent, corruption is often high; several studies have found a strong correlation between deforestation levels and perceptions of corruption. 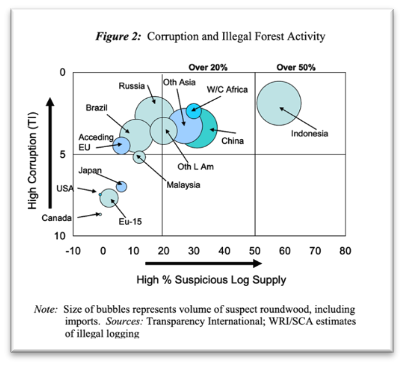 According to Transparency International, corruption is a leading driver of illegal logging, facilitating illicit activities and weakening law enforcement efforts to combat them. In 2016, Interpol conducted a thirteen-country survey which found an average of 250 cases of corruption in each country related to the forestry sector between 2009 and 2014 and estimated the global cost of corruption in the forestry sector at $29 billion.

Corruption can take a number of forms, including rent-seeking, cronyism, nepotism, and fraud. The most common form of corruption is bribery. In the forestry sector, bribery may be used in order to:

Corruption can be found at every stage of the supply chain, including access and permitting, hiring, transport, processing, export and trade, governance, and the process of hiding the proceeds. Certain points face a particularly high risk for bribery.

Interpol has identified the harvest period as the most common point for bribery, comprising 50% of identified cases. Here, government forest officials are the most common recipients of bribes, and the harvest is the most common point of bribery. The harvest point is a particular risk because timber harvesting takes place in remote regions that are difficult to monitor. Additionally, forestry officials are often poorly paid and vulnerable to bribes. Once timber is illegally harvested, it becomes more difficult to detect whether the timber was logged legally or illegally. Permitting and documentation processes are also ripe for corruption. A lack of transparency in the permitting process, combined with significant revenue and discretionary power also create vulnerabilities for corruption. Public officials can take advantage of these factors to amass power or accrue funds through the strategic allocation of permits or the solicitation of bribes.

For rare species, the CITES documentation process can also create corruption risks. For example, the NGO TRAFFIC identified importing reports in Vietnam of Siamese Rosewood that suggest the widespread use of counterfeit Cambodian CITES permits. Once timber is exported with seemingly correct documents, it becomes much harder to identify fraudulently labeled species later on.

Another key vulnerability for bribery is the export process. The illicit proceeds of illegal logging are often hidden through trade-based money laundering, the process of disguising proceeds of crime by moving value through trade transactions to legitimize their illicit origin. By bribing customs officials, timber traffickers are able to launder illegal timber into the global trade system, enabling them to both sell the timber and more effectively disguise the proceeds.

Each country and region’s forestry sector is unique, as are the corrupt practices and schemes that plague them. Additionally, because of the clandestine nature of this illicit activity, it can be difficult to identify with precision how corrupt actors operate in the timber trade. However, a series of recent investigations have revealed some of the ways that complex corruption schemes facilitate illegal logging.

In 2019, the Environmental Investigation Agency released an investigation into the trade of rosewood in Ghana, which identified corruption as a crucial factor at every level of the trade. According to witnesses interviewed, corruption and collusion fuel the trade through bribes for forest permits, the use of escorts to evade checkpoints, the forging of official documents, and retrospective issuance of CITES permits.

In 2018, The Gecko Project, an investigative reporting group, found that corrupt officials were selling forest land to raise money for political campaigns, as well as selling permits and receiving cash bribes for licenses. A subsequent investigation, conducted along with Mongabay, alleged that permits issued by a corrupt official for a massive plantation project in Papua province in Indonesia were faked, leading to an investigation by Indonesian timber auditors.

In 2020, Earthsight released the results of an investigation into the supply of illegally harvested wood in Ukraine. According to Earthsight, during President Viktor Yanukovych’s term, from 2011 to 2014, companies paid millions of dollars in bribes into offshore accounts of Yanukovych’s friends. Anonymous whistleblowers in Ukraine reported that the logs on which these bribes were paid were then sold IKEA, the largest consumer of wood products in the world.

How Whistleblowers Can Report Corruption in the Timber Trade

Individuals with knowledge of corruption in the timber trade face significant obstacles to reporting, including corrupt local law enforcement and the threat of violent retaliation or. However, whistleblowers around the world can use powerful U.S. whistleblowers laws to report confidentially report corruption.

Whistleblowers can confidentially report bribery through the Foreign Corrupt Practices Act, one of the most powerful and effective transnational anticorruption laws in the world.

The FCPA is extremely broad in scope and applicable worldwide. It applies to all U.S. or foreign companies required to file periodic reports with the U.S. Securities and Exchange Commission, and it extends to a company’s employees, officers, stockholders, and agents such as third-party actors, distributors, and consultants.

Additionally, violations of the Foreign Corrupt Practices Act are predicate offenses for money laundering under U.S. law. Whistleblowers around the world can use the IRS whistleblower program to confidentially report attempts to launder the proceeds derived from FCPA violations. Liability for laundering the proceeds of forest crimes extends beyond perpetrators of the original forest crime to third parties who facilitate financial transactions, including banks, accountants, lawyers, and real estate companies. Whistleblowers can use the IRS whistleblower law to report companies who bribe foreign officials to obtain land concessions or logging permits and then conduct transactions in the U.S. financial system with the proceeds, along with the third parties who facilitate these transactions.

Whistleblowers can also qualify for monetary rewards. Whistleblowers who voluntarily provide actionable information about FCPA violations are entitled to a financial reward between 10% to 30% of all sanctions obtained by the U.S. government in cases where the money collected is above $1 million. Under the IRS whistleblower program, if there is a successful prosecution that meets the financial qualifications (over $2 million in taxes, penalties, and interest OR gross income over $200,000), the whistleblower will be entitled to an award of between 15 and 30 percent of the total amount collected by the government.

To learn more about these whistleblower laws and rewards, read The New Whistleblower’s Handbook, the first-ever guide to whistleblowing. The Handbook, authored by the nation’s leading whistleblower attorney, is a step-by-step guide to the essential tools for successfully blowing the whistle, qualifying for financial rewards, and protecting yourself.

While there are no FCPA enforcement actions involving companies in the timber trade as of 2020, timber industry whistleblowers are uniquely positioned to change that. With inside knowledge of corrupt schemes that law enforcement may be unable to detect, insiders could play powerful role in detecting and helping to prosecute corrupt actors in the timber trade. Thanks to the Foreign Corrupt Practices Act and the IRS whistleblower law, whistleblowers are well-suited to do so while protecting their identities and qualifying for a reward.