Learn more in the Handbook
Q: Are wildlife whistleblowers eligible for rewards?

Yes! The Lacey Act includes language providing monetary incentives to anyone who discloses information about wildlife crimes. Further, the Fish and Wildlife Improvement Act explicitly ensures that rewards can be paid to whistleblowers who report violations of any law administered by the United States Fish and Wildlife Service or by the National Marine Fisheries Service relating to fish, wildlife or plants. Other laws that protect wildlife also contain similar reward provisions, including the Endangered Species Act and the Rhinoceros and Tiger Conservation Act . Additionally, whistleblowers who report illegal wildlife trafficking may also be covered under other, more traditional, whistleblower reward laws, such as the Foreign Corrupt Practices Act (bribery of foreign officials) or the False Claims Act (customs violations).

Q: Why did Congress include the reward provisions referenced above?

Congress amended the Lacey Act in 1981 to provide “powerful”, “more effective enforcement tools to the wildlife agencies of the state and the Federal Government.”

Q: Have similar reward laws been successful in other arenas?

Absolutely! The effectiveness of incentivizing insiders to report corruption has been praised by all federal agencies with authority to grant rewards. These agencies and programs include:

Department of Justice - False Claims Act:
The “impact” of the reward laws “has been nothing short of profound. Some of these [cases] may have saved lives. All of them saved money.”
--Eric Holder, Attorney General.


Securities and Exchange Commission - Foreign Corrupt Practices Act:
The “whistleblower program . . . has rapidly become a tremendously effective force-multiplier, generating high-quality tips, and in some cases virtual blueprints laying out an entire enterprise, directing us to the heart of the alleged fraud.”
--Mary Jo White, Chair, Securities and Exchange Commission.

Image below shows the Quantitative Success of Whistleblower Rewards 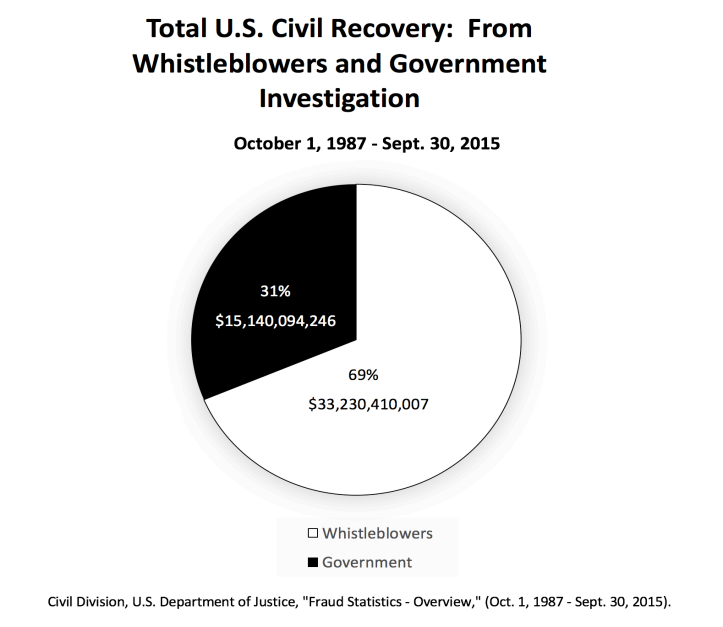 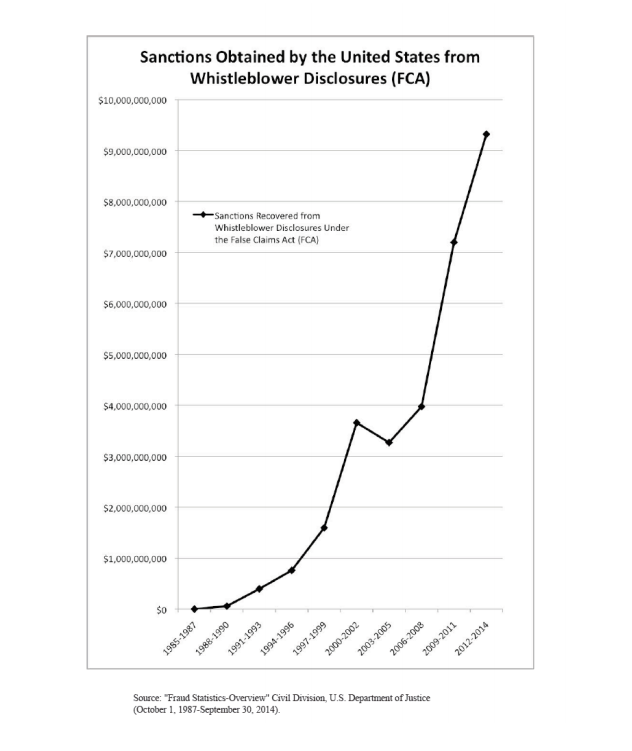 Q: Are there any academic studies that have validated whistleblower rewards?

Yes. The University of Chicago Booth School of Business studied all reported fraud cases in large U.S. companies between 1996 and 2004 to determine the most effective mechanisms for detecting corporate fraud. The study concluded that whistleblowers were the key to fraud detection:

Q: Is there a reward law similar to the Lacey Act that has been successfully used?

Yes, the reward provision in the Act to Prevent Pollution from Ships (APPS) is very similar to the Lacey Act reward provision and has been crucial to enforcement. APPS governs the illegal dumping of oil on the high seas in violation of the MARPOL Convention. Both the wildlife protection laws and APPS cover violations of international conventions that occur outside the United States. The Department of Justice has explained that the reward program “serves a valuable law enforcement purpose by encouraging those most likely to know of the illegal conduct to report it and cooperate with law enforcement, ” and has made the United States the leading country in enforcing MARPOL. Over 50% of prosecutions under APPS rely on whistleblowers.

However, the APPS whistleblower provision is weaker than the wildlife whistleblower laws. Under APPS, the Justice Department must ask a court to approve whistleblower rewards, and the rewards are capped at 50% of any collected penalty. The wildlife laws have no such cap and do not require the government to file a separate motion.

Q: Why is the APPS whistleblower award provision necessary?

In the words of the Department of Justice:

“The APPS whistleblower award provision serves a valuable law enforcement purpose. Violations of the kind seen in this action are exceedingly difficult to detect. They typically occur far offshore beyond monitoring by the Coast Guard. Illegal dumping is easy to conceal…The only way such offenses are likely to come to the attention of the Coast Guard is where low ranking crew members with knowledge step forward."

“Unfortunately, crew members seldom step forward because providing incriminating information against senior officers is fraught with peril. While at sea, crew members are vulnerable to physical harm and other abuses. At the conclusion of a voyage, crew members risk being fired and subsequently blacklisted from future employment on other vessels…."

“A monetary award under APPS serves several important functions. It rewards crew members for taking the personal and professional risks associated with coming forward and providing information. With respect to future offenses, it provides an incentive to crew members to alert inspectors and investigators to crimes. Finally, it provides some measure of compensation when crew members are financially harmed as a result of their cooperation.”

Q: Is paying rewards consistent with the current mandate from Congress?

Yes. As Congress recently reiterated in enacting the Eliminate, Neutralize and Disrupt (END) Wildlife Trafficking Act of 2016, “it is the policy of the United States to take immediate actions to stop the illegal global trade in wildlife and wildlife products and associated transnational organized crime.” 16 U.S.C. § 7612(1). The statutory language builds on the policies set forth in Executive Order No. 13648, which established the Presidential Taskforce on Wildlife Trafficking.

The reward provisions in the Fish and Wildlife Improvement Act provide the perfect tool to accomplish the policy goals set forth in the END Wildlife Trafficking Act. Congress explained that one of the purposes of the END Act was to “support the efforts of, and collaborate with, individuals, communities, local organizations and foreign governments to combat poaching and wildlife trafficking.” 16 U.S.C. § 7611(5). Because many of the violations that comprise wildlife trafficking offenses originate in foreign commerce or are extraterritorial in inception, international whistleblowers cannot take advantage of many of the protections granted to United States citizens under other U.S. laws. Rewarding whistleblowers who report wildlife trafficking violations that could result in a successful prosecution if jurisdiction was ultimately established under U.S. law is key to promoting the detection of wildlife crimes.

Q: Has the U.S. paid rewards to non-U.S. citizens?

Yes! Foreign sources have been an invaluable asset to the United States. All federal agencies that implement laws for which the violations can originate overseas actively solicit and support foreign whistleblowers.

The Securities and Exchange Commission (SEC) ’s Office of the Whistleblower has noted, “allowing foreign nationals to receive awards under the program best effectuates the clear Congressional purpose underlying the award program.” In FY 2020 , the SEC received whistleblower tips from individuals from 78 different countries.

Q: Will paying rewards interfere with or detract from funds for conservation?

Absolutely not. Paying rewards will incentivize reporting, which in turn will allow the government to prosecute more crimes, resulting in increased criminal penalties and thus more money for direct conservation. This cycle is exemplified in Act to Prevent Pollution from Ships (APPS) prosecutions . The total amount collected from successful prosecutions is substantially higher than the reward paid to the whistleblower (without whom there often would be no case). Specifically, the whistleblower reward is only based on monies obtained for the APPS violation. Most APPS cases also include convictions based on laws for which rewards are not included, such as obstruction of justice or violations of the Clean Water Act.

In the 70 most recent APPS cases in the public record for which a whistleblower was responsible for detecting the violation and triggering the successful investigation, the plea agreements/judgments entered by the courts have directed $45 million to environmental and conservation organizations, returned $100 million to the U.S. Treasury, and awarded whistleblowers $31.8 million. The whistleblower’s share of the collected proceeds was the smallest portion of the required payments. Far more important then the sanctions obtained, the whistleblower disclosures were able to hold wrongdoers accountable, force companies to enter into aggressive compliance agreements to prevent future pollution and act as a deterrent on other ship owners.

Q: What is the difference between a tip line and a reward program?

It is well documented that monetary incentives motivate those with information to come forward. “One of the critical challenges facing both [Enforcement and Compliance] officers and government enforcement officials is convincing employees to step forward when misconduct occurs.” Without such an incentive, those with information are unlikely to put their jobs and safety at risk and call a tip line.

Further, employees who report wrongdoing under a reward law are incentivized to provide detailed and high-quality evidence and are further incentivized to work closely with law enforcement on an ongoing basis in order to help ensure that there is a successful prosecution. The whistleblower is rewarded based on the quality of his or her information, and the ability of the United States to obtain credible and admissible evidence as a result of their cooperation.

This has led officials who work with whistleblowers under these programs to comment as to the high quality of information provided under whistleblower reward programs:

Q: Is there legislative support for reward laws?

In a recent hearing before the House Government Oversight Committee on the use of fees and fines collected by the federal government, all Members of the Committee (Democrat and Republican) praised whistleblowers and the positive impact that Congressionally approved reward laws have on detection, oversight, and accountability.

“Mr. Kohn, I want you to rest assured. I’ve read your testimony and I actually called my chief of staff and told him that we needed to make sure that whistleblowers are compensated and protected.”
--Rep. Gary Palmer (R-AL), the principle sponsor of the fee-related bill under consideration

If you need help finding an attorney, visit Resources for Locating an Attorney.
For additional information on the Wildlife Whistleblower Laws, please read Rules 6, 9, and 12 and Checklist 8 published in The New Whistleblower's Handbook: A Step-by-Step Guide to Doing What's Right and Protecting Yourself (Lyons Press, 2017).

The material in this FAQ may not reflect the most current legal developments. The content and interpretation of the law addressed herein is subject to revision. We disclaim all liability in respect to actions taken or not taken based on any or all the contents of this website or in this FAQ. Before acting on any information or material in this web site, we strongly recommend you review these resources.