Deforestation in the Congo Basin Rainforest

The Congo Basin has suffered centuries of timber exploitation. Today, corrupt networks continue to contribute to deforestation by rapidly harvesting timber for export and clearing forests to make way for industrial agriculture. Rapid deforestation not only undermines sustainable local livelihoods and ecosystems, but it also has global consequences; according to Global Witness, between 2013 and 2014, the destruction of DRC’s rainforest resulted in carbon emissions equivalent to operating fifty coal-fired power plants for a year. Through complex corporate structures and tax havens, these networks also undermine local governance and deprive the region of tens of millions in tax revenue per year.

As palm and rubber plantations expand and global demand for the region’s timber grows, the costs and consequences of deforestation in the region are predicted to become increasingly more severe. If companies continue to engage in deceptive and corrupt behavior, industry whistleblowers could play an important role by reporting illegal logging and the financial schemes that enable illegally-sourced timber to be sold around the world. 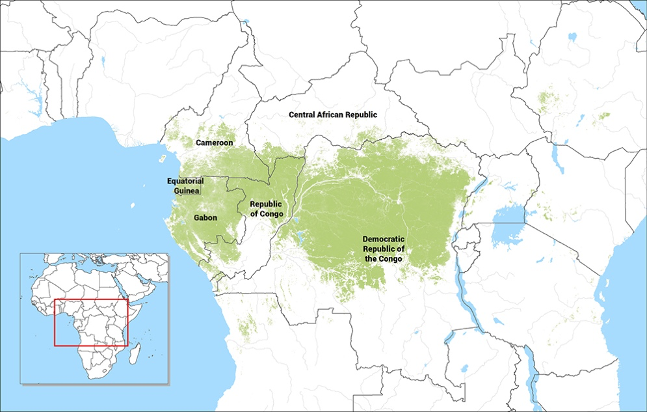 Central Africa Regional Program for the Environment, “Trees of Life: Stories of Struggle, Courage and Hope in the Congo Basin,” United States Agency for International Development

Illegal Logging and Deforestation in the Congo Basin

The clandestine nature of illegal logging makes it difficult to estimate the extent of deforestation in the region. However, using satellite imagery, undercover reporting, and insight from local communities and whistleblowers, investigative NGOs have recently been able to provide extensive reporting on particular illegal logging networks. Recent reports have asserted that most of the timber from the Congo Basin rainforest may be illegally-sourced and facilitated by high-level crime and corruption.

In 2018, Global Witness revealed that the European company Norsudtimber, the single-biggest owner of logging concessions in the DRC rainforest, was operating illegally on 90% of its timber concessions. In 2019, another Global Witness report revealed that Industrie Forestière du Congo (IFCO), the second largest exporter of timber from DRC, was logging outside the approved annual harvest area, failing to pay taxes, and breaking labor laws and agreements with local communities. After being suspended for these violations, the company continued to log in violation of its suspension.

The Congo Basin is also predicted to be palm oil’s “next frontier,” and a boom in industrial palm oil and rubber development threatens to dramatically increase illegal deforestation. Investigative NGO Earthsight found that between 2013 and 2018, five hundred square kilometers of forest were cut down to make way for palm oil plantations. While commodity prices have temporarily halted activity, Earthsight predicts that when commodity prices rise, the planned expansion of plantations could rapidly accelerate deforestation.

The Role of Corruption and Corporate Secrecy

Rampant corruption in the Congo Basin helps to facilitate illegal logging, allowing companies to gain advantageous concessions and avoid oversight. In 2019, the Environmental Investigation Agency revealed that a group of affiliated timber companies referred to as the “Dejia Group” were relying on bribery and other forms of corruption to rapidly harvest valuable tropical timber in the region. By routinely bribing ministers, the companies were able to illegally obtain timber concessions, as well as to avoid penalties for consistently overharvesting and exporting in excess of Congolese quotas.

Opaque corporate structures and secrecy jurisdictions also facilitate deforestation in the region by allowing companies to avoid taxes and distance importers in demand countries from connections to deforestation. Prior to Global Witness’s investigation into Norsudtimber, Norsudtimber had been able to use a complex corporate structure to obscure the beneficial owners of the company and to obscure the end buyers by trading timber through shell companies in secrecy jurisdictions including Hong Kong and Dubai.

The motivation for the illegal timber trade is fueled by demand in China, Europe and the U.S., and U.S. and EU importers may be violating laws to obscure the illegal origins of the timber. In its Toxic Trade report, EIA connected the Dejia Group to two U.S. companies, Evergreen Hardwoods and Roseburg, alleging that the companies were complicit in negligently sourcing the timber. Additionally, Global Witness warned that ten European traders could be violating EU regulations, which require companies to show they have taken clear steps to reduce the risk of importing illegally-sourced timber, by importing illegal Congo timber from IFCO. 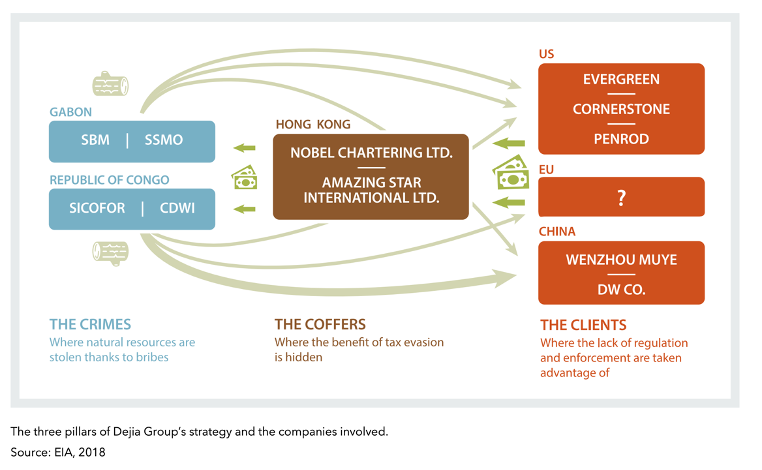 How Whistleblowers Can Report Illegal Logging and Deforestation

Like elsewhere in the world, whistleblowers and environmental defenders in the region face serious obstacles to reporting illegal deforestation. In 2019, environmental defender Joel Imbangola Lunea was working for RIAO-RDC, a Congolese NGO protesting the impacts of palm oil plantations on local communities in DRC, when he was killed by a security guard employed by Canadian palm oil giant Feronia. Global Witness and RIAO-RDC report that communities living near palm oil plantations have faced criminalization, police harassment, beatings, and death threats for criticizing the plantations.

Whistleblowers have a unique path for reporting the illegal timber trade through the Lacey Act, which holds U.S. importers accountable for ensuring that imported timber or plant products are legally sourced. Using the Lacey Act, whistleblowers in the Congo Basin can confidentially report U.S. importers who fail to exercise due care in importing timber or other plant products that were harvested, transported, or exported in violation of foreign laws. The Lacey Act requires importers to provide information including the scientific name, quantity, value, and country of harvest origin, and whistleblowers can report U.S. importers who hide evidence of illegal sourcing by mislabeling timber products.

Additionally, whistleblowers can use the Foreign Corrupt Practices Act (FCPA) to confidentially report corporations who use bribes to acquire concessions or avoid penalties for deforestation or whose weak internal controls enable bribery. Whistleblowers can report any U.S. or foreign companies required to file periodic reports with the U.S. Securities and Exchange Commission, and the FCPA extends to a company’s employees, officers, stockholders, and agents such as third-party actors, distributors, and consultants. Additionally, violations of the Foreign Corrupt Practices Act are predicate offenses for money laundering under U.S. law. Whistleblowers can use the IRS whistleblower program to report banks, law firms, and real estate companies who help to launder proceeds derived from FCPA violations. To learn more about these laws, read The New Whistleblower’s Handbook, the first-ever guide to whistleblowing, authored by the nation’s leading whistleblower attorney,

NGO investigations into deforestation have revealed that the corrupt networks operating in the region have been able to take advantage of foreign laws to hide evidence of deforestation and siphon off profits. Whistleblowers could combat this by using these powerful U.S. laws to confidentially report companies profiting from illegal deforestation. With these laws, and whistleblowers’ unique knowledge of potentially illegal behavior, timber whistleblowers are well-suited to help detect and prosecute the financiers of illegal deforestation, while protecting their identities and qualifying for a reward.